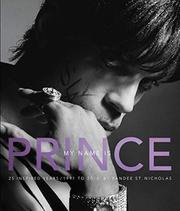 MY NAME IS PRINCE

A Los Angeles–based photographer pays tribute to a legendary musician with anecdotes and previously unseen images collected from their 25-year collaboration.

St. Nicholas (co-author: Whitney: Tribute to an Icon, 2012, etc.) first met Prince in 1991 at a prearranged photo shoot. “The dance between photographer and subject carried us away into hours of inspired photographs…and the beginning of a friendship that would last a lifetime.” In this book, the author fondly remembers their many professional encounters in the 25 years that followed. Many would be portrait sessions but done on impulse, like those in a burned-out Los Angeles building in 1994 and on the Charles Bridge in Prague in 2007. Both times, the author and Prince came together through serendipity to create playfully expressive images that came to represent the singer’s “unorthodox ability to truly live life in the moment.” Other encounters took place while Prince was performing at Paisley Park, his Minneapolis studio, or at venues in LA, New York, Tokyo, and London. One in particular came about after the 1991 release of Prince’s Diamonds and Pearls album and led to the start of St. Nicholas’ career as a video director. Prince, who nurtured young artists throughout his career, pushed the author to “trust my instincts…expand myself creatively.” What is most striking about even the most intimate of these photographs—even those shot with Mayte Garcia, the fan-turned–backup dancer who became Prince’s wife in 1996—is the brilliantly theatrical quality of the images. As the author observes, the singer was never not the self-conscious artist: “Prince was Prince 24/7.” Nostalgic and reverential, this book—the second St. Nicholas produced with/for Prince—is a celebration of friendship and artistry. Prince fans are sure to appreciate the book, and those interested in art photography will also find the collection highly appealing.

A dazzling visual homage to a music icon gone too soon.