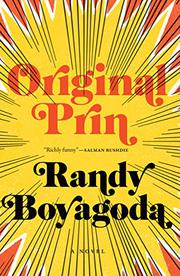 Princely St. John Umbiligoda teaches English at a college once called Holy Family College until the faculty “expressed concern that the school was becoming increasingly irrelevant and too Catholic-seeming,” whereupon it became the University of the Family Universal, or UFU. (Say the initials aloud.) That didn’t help the fiscal situation, and the school is now teetering on bankruptcy. That’s just the beginning of Prin’s troubles. He’s not particularly happily married, he’s not well-paid, his work as a specialist in “marine life in the Canadian literary landscape” isn’t setting the world on fire, and though only 40 he’s battling prostate cancer. When a Chinese developer called The Nephew comes along with a plan to bail out the school, it’s to make himself a fortune by leveraging the resources of a faraway Middle Eastern nation called Dragomans: UFU will become a retirement home for the well-to-do, and its Dragomans branch will train students to become caretakers with “diplomas…in Eldercare Studies,” as Prin’s girlfriend, who’s in on the deal, reveals, with the students then coming to Toronto “for internships at the condominium The Nephew is going to build on your campus." Teaching The English Patient far from home has its attractions, and so does that erstwhile girlfriend, but politics complicates the picture—politics academic and worldly, and economics, and sex, and culture clashes, and good old-fashioned terrorism. Boyagoda’s novel careens to an untidy, violent end with plenty of unresolved questions, which makes it a good thing that it’s supposed to be the first installment of a trilogy. Messy though it may be, it’s a lot of fun—and you can’t help but read on when opening a book that begins, “Eight months before he became a suicide bomber, Prin went to the zoo with his family.”