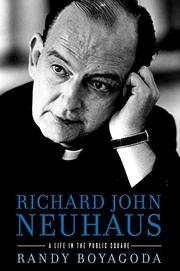 A Life in the Public Square

Boyagoda (American Studies/Ryerson Univ.; Beggar’s Feast, 2011, etc.) does a true service by offering this first full-length biography of the Christian cleric. Though Neuhaus was a man who defied labels, he was classified by many as a radical leftist, neoconservative, Lutheran, Catholic, activist, writer, etc. Boyagoda begins with a compelling account of Neuhaus’ boyhood as the precocious son of a conservative Lutheran pastor in Canada. One of eight children, he nevertheless soon stood out as unique, playing preacher and giving sermons to his little sister. Despite largely misspent teen years, which Boyagoda does not blanch to reveal, Neuhaus finally settled into a life of the mind at a St. Louis Lutheran seminary. There, he caused trouble not so much through alcohol and pranks as through doctrinal difference. Eventually, Neuhaus pursued urban ministry in New York and fell headlong into the civil rights movement and liberal politics. By the end of the 1960s, however, his views had begun to change, and he began to move toward becoming one of America’s most recognizable neoconservatives. Moreover, he continued on a spiritual road that would eventually bring about his conversion to Catholicism and ordination as a Catholic priest in 1990. Along the way came international fame, the editorship of First Things and such acclaimed books as The Naked Public Square (1984). Neuhaus also rubbed shoulders with legions of important politicians, activists, theologians, pundits and others during the course of his life. Boyagoda dispassionately describes this fascinating and active life, and he manages to blend skills as a folksy storyteller, researcher and unbiased historian, providing a biography that is balanced, interesting and relevant.

A useful, provocative spotlight on one of the leading lights of the 20th century.