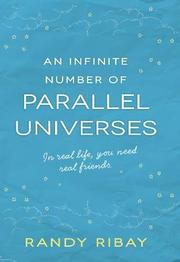 AN INFINITE NUMBER OF PARALLEL UNIVERSES

A diverse quartet of Dungeons & Dragons players spends the last week of summer before senior year road tripping from Philadelphia to Seattle.

Monday night D&D just doesn't feel the same as it has over the years since sixth grade. Archie, the straight white boy, has a newly out-and-proud dad. Archie won't tell anyone either about his father's gayness or about his own attraction to the Dungeon Master, Mari, who wants to be a writer. Mari's closest with Dante, the only other black kid in school, a gigantic, nonathletic, deeply closeted computer geek. Their circle is closed out by Filipino Sam, who is devoted to his girlfriend, Sarah. Sarah's family moves across the country, leaving Sam heartbroken, and soon the four gaming friends are headed out on a road trip in pursuit, told through shifting perspectives. Mari worries about illness in the family and being a transracial adoptee, and Dante about having been outed to his religious and judgmental grandparents. Meanwhile, Archie makes frequent unwanted sexual and racial jokes, while Sam's merely sullen and unfriendly. They each have an epiphany—some more rewarding than others. Though the setup appears to be tailor-made for a #weneeddiversebooks world, its execution falls short with its characters’ arcs: the straight white creep is rewarded, the gay black mensch is punished, and girls are judged for being insufficiently geeky or insufficiently sexually available.

Both profoundly literary and sadly unsatisfying.