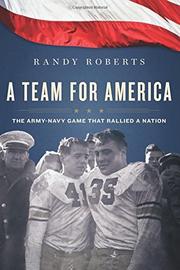 A TEAM FOR AMERICA

The Army-Navy Game that Rallied a Nation

Comparisons between football and war are as old as the game itself, but never more relevant than in this history of Coach Earl “Red” Blaik’s Army team and its historic defeat of Navy as World War II raged. The war and its need for manpower forced the suspension of most college athletics, but the belief that sports provided good training for soldiers and a needed morale boost for the public allowed some to continue in a limited capacity. The stakes were particularly high for the West Point cadets, who had to meet the academy’s rigid academic requirements in addition to their athletic commitments. Roberts brings a historian’s thoroughness to the subject, tracing Blaik’s transformation of the team through canny recruiting and the adoption of the new “T” formation that would revolutionize the game. Army’s main goal was to beat archrival Navy for the first time since 1938, with Blaik’s coaching skill and the efforts of players like future Heisman trophy winners “Doc” Blanchard and Glenn Davis making it possible. With a season featuring student athletes who would soon graduate to the battlefield and alumni who were already serving on it, the inherent drama of the story keeps the narrative moving along. But though interest was surely high for the 1944 match-up between the nation’s top-ranked teams, Roberts falls short of providing convincing evidence for his argument that “never in the history of the sport would there be a more important game.”

A workmanlike account of a fascinating time in American collegiate sports history.