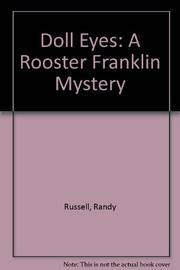 After a two-year split, the engagingly corrupt Rooster Franklin (Caught Looking, etc.) has decided he can't live without Rosalinda, and when he shows up on her Kansas City doorstep, he fully expects her to marry him. The problem? Rosalinda has already married snooty Joseph Warman—plus there's a dead body at Rosalinda's former address. Who murdered pretty Kathleen, and why? The artist was supposedly a protÇgÇe of Rosalinda and Warman's, even though her work wasn't being shown at Inside Moves, their fancy gallery. Then an arsonist burns Kathleen's entire output, and Rooster is convinced Warman is behind it. Hellbent on separating Warman from Rosalinda, he pokes and pries and comes up with a steamy videotape that sets his romantic prospects even further back. Meanwhile, Rosalinda's mobster brother is tailing Rooster, and the cops are sizing him up for a jail cell. Finally, though, a million-dollar pane of stamps will end Rooster's chances of marrying—and explain the motive behind several other murders. A mean, funny spin on what happens when you talk yourself into being in love.