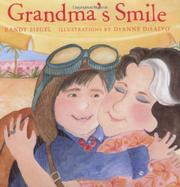 Siegel’s debut is a whimsical salute to the lengths grandmothers will go to to see their grandchildren. When the young narrator’s grandmother calls up to say that she has lost her smile, he is appalled and quickly agrees to drop everything and fly down to help her find it. So he packs his suitcase—with flashlight, magnifying glass, tool belt, telescope and clothes—and heads from the wintry city to the sunny southern beaches, giving readers a nice introduction to airports and flying along the way. And that smile of Grandma’s? Turns out it wasn’t so hard to find after all. The juxtaposition of the young boy’s age ("six and three-quarters") and his grown-up attitude makes for some pretty funny lines—"I'm only being patient because there's no point being impatient," he says. DiSalvo’s softly colored illustrations continue the tongue-in-cheek humor. Long-distance grandmothers everywhere will sympathize with Grandma as she searches for her lost smile in her grandson’s picture, among his toys and in his bedroom, just as they will rejoice in the pair’s loving reunion; those who read this may try a similar trick. (Picture book. 4-8)