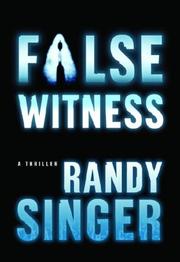 The hunt for a code that would end the Internet as we know it pits three spunky law students against an unscrupulous FBI and vicious Chinese gangsters.

Squeaky-clean Christian thriller-writer Singer teases with a fast-moving, semi-zany opening section in which repo-man David Hoffman, working his jittery trade in Vegas, learns that he has 48 hours to locate Professor Dagan, whose Abacus Algorithm easily undoes the Internet’s most deeply imbedded security safeguards. Committed Christian Dagan planned to sell his secret to the world’s three most powerful private security firms and send his profits to churches in China, but the buyers were actually Triad gangsters who hold Hoffman’s peppy athletic wife Jessica hostage until they have their hands on that handy algorithm. Hoffman flounders for a few seconds, but comes up with a strategy in which he pledges every cent he has plus some he doesn’t to get information about Dagan from the local and well-informed community of bail bondsmen and repo-people and, within the deadline, he’s got his man. Then, in the handover of Dagan, the noble professor has to sacrifice himself to keep the Hoffmans alive. Cut to Atlanta, where the action bogs. Laser-focused third-year law student Jamie Brock and her Criminal Procedure classmates—studly, flamboyant, African-American Isaiah Washington and brilliant, nerdy, prodigy Wellington Farnsworth—have to endure the tiresome Socratic teaching methods of pudgy ex-Californian super-attorney-turned-professor Walter Snead. Snead, whose reputation is as unpleasant as his classroom manner, is also the supervisor of the legal-aid clinic where Jamie and Isaiah meet the downtrodden, including a client who doesn’t fit the usual profile when he first seeks help from Jamie and then takes it on the lam and disappears. Before you can say “witness protection program,” Jamie, Isaiah and Wellington are surrounded by bad guys, some of whom are so awful they kill a totally blameless Labrador retriever in cold blood!

A rousing opening degenerates into a routine legal thriller.