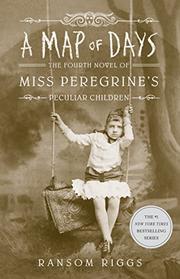 A MAP OF DAYS

From the Peculiar Children series, volume 4

The victory of Jacob and his fellow peculiars over the previous episode’s wights and hollowgasts turns out to be only one move in a larger game as Riggs (Tales of the Peculiar, 2016, etc.) shifts the scene to America.

Reading largely as a setup for a new (if not exactly original) story arc, the tale commences just after Jacob’s timely rescue from his decidedly hostile parents. Following aimless visits back to newly liberated Devil’s Acre and perfunctory normalling lessons for his magically talented friends, Jacob eventually sets out on a road trip to find and recruit Noor, a powerful but imperiled young peculiar of Asian Indian ancestry. Along the way he encounters a semilawless patchwork of peculiar gangs, syndicates, and isolated small communities—many at loggerheads, some in the midst of negotiating a tentative alliance with the Ymbryne Council, but all threatened by the shadowy Organization. The by-now-tangled skein of rivalries, romantic troubles, and family issues continues to ravel amid bursts of savage violence and low comedy (“I had never seen an invisible person throw up before,” Jacob writes, “and it was something I won’t soon forget”). A fresh set of found snapshots serves, as before, to add an eldritch atmosphere to each set of incidents. The cast defaults to white but includes several people of color with active roles.

Not much forward momentum but a tasty array of chills, thrills, and chortles.