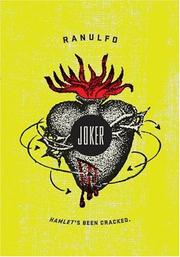 Hit head-on with the double-whammy death of his best friend and divorce of his parents, the once-popular, star-student, football-playing Matt eschews everything that was once important to him and reinvents himself as a dilettante and ne’er do well named Joker. In this bizarre offshoot of Shakespeare’s Hamlet, Matt’s story unfolds in a schizophrenic blitzkrieg of inner musings and dreams mixed with real time drama: He’s “haunted” by his drunken, depressed, cuckolded father. He denounces his mom’s recent marriage to his father’s best friend Claude. He rebuffs his adoring girlfriend Leah, and runs away from home to live with two burnouts named Roscoe and Guildo. It’s clear that Ranulfo relishes devising these allusions to the classic work, and he portrays them with much gusto and aplomb. Unfortunately, his style—no doubt also intended to recall Shakespeare’s poetic language—becomes so dissonant at times that it veers into near-absurdist territory that ultimately dissects the narrative into something so rambling, nonsensical and forced that teen readers won’t be able to grasp onto much of anything except for one majorly pissed-off main character. (Fiction. YA)