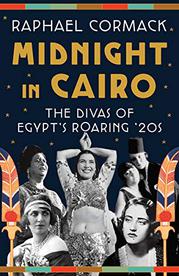 The Divas of Egypt's Roaring '20s

A vibrant history of Cairo’s women-dominated cultural landscape between the wars.

As Cormack shows in this singular work of scholarship, Cairo in the 1920s and ’30s was a unique milieu in which women could excel as proudly feminist artists and entrepreneurs. Moving chronologically, the author, who holds a doctorate in Egyptian theater and has written extensively about Arabic culture, drills down on the neighborhood of Ezbekiyya, especially along Emad al-Din Street, where bars, restaurants, theaters, and other entertainment establishments flourished from roughly the turn of the 20th century to the 1950s. This is where Europeans—many of whom descended from 19th-century colonizers—mingled with the locals. During the 1919 revolution, “an example of unprecedented national unity,” women played prominent roles. While women artists and performers endured numerous unfair stereotypes, the author ably shows their significance to the cultural scene. Via a dozen or so minibiographies of these fascinating, talented women, many of whom rose from humble beginnings—as well as scores of contextualizing photos—Cormack makes the convincing case that “at its core, this was a group of women demanding to be heard as they asserted their wishes, claimed their rights, and made space for themselves.” Shining examples abound: Munira al-Mahdiya, thriving in the new genre called “taqtuqa” (a light, popular song), was “the first women in Egypt to lead a theatrical troupe.” Rose al-Youssef, “one of the most famous actresses in Egypt,” started a magazine that served as an important source of information on Cairo’s nightlife. Fatima Rushdi became known as the “Sarah Bernhardt of the East.” Oum Kalthoum “is the singer now remembered worldwide as the most popular icon in the history of Arabic music.” Cormack also examines Aziza Amir’s Layla (1927), which was considered “the first Egyptian film.”

A lively and original story of modern Egypt told through the lives of its first generation of women celebrities.