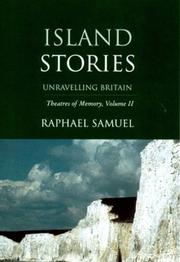 A collection of scholarly, oddly compelling essays that aim to unravel the complexities of British identity. Historian Samuel intended Island Stories—the second installment of a planned trilogy—to address “the wildly different versions of the national past on offer at any given time, depending on whether the optic is that of town or country, center or periphery, the state or civil society.” Although he died of cancer before he could complete the project, his longtime editors and literary executors completed it posthumously, bringing together key essays intended for the book, many of them on the verge of completion, others unfinished. The result is an odd pastiche that encompasses a variety of forms: essay, argument, travelogue, and personal memoir. It seems less a definitive history than a history of definitions—Samuel clearly delighted in pulling apart the labels that have often been applied to the inhabitants of the so-called United Kingdom. Current events are proving it to be anything but, and Samuel made a point of noting that “the unity of the British Isles, so far from being the norm, can appear rather as an exceptional condition.” Samuel examines the myths and oppositions inherent in the idea of Britain: Saxon and Celt, urban and rural, middle class and working class. Samuel’s timeliness is indisputable: Nationality has become the key issue, the “storm-center” around which domestic politics in Britain now revolve. Indeed, there is a strange discomfort in using the word “British”; Samuel himself described it as capable of generating “a vertiginous sense of impending loss.” Rather than being a “secure, genetic identity,” he wrote, “[it] can be seen as something culturally and historically conditioned, always in the making, never made.” Strangely enough, the same could be said of his book. As fascinating and politically astute as Island Stories is, it suffers nonetheless from a lingering incompletion. (illustrations, not seen)