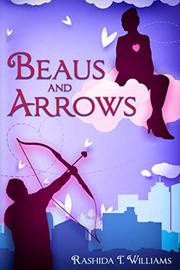 A supernatural matchmaker faces a series of troubles in Williams’ debut fantasy romance.

Emory has become bored with his work; although his role as Cupid comes with great responsibility, he finds himself becoming increasingly disillusioned with the messiness of human emotions. Before long, this results in an abuse of power, as Emory begins to shoot his arrows randomly, causing all sorts of mismatched relationships. His carelessness results in Blair, his favorite human, getting a broken heart, and to his astonishment, it seems as if she’s lost all hope of finding her true love. But the bad news doesn’t stop there; Emory has also been selected by “the Powers that Be” for an audit, which will evaluate his effectiveness as Cupid on Earth. Desperate to keep his job, Emory scrambles to fix Blair’s troubles—even if it means suppressing his own feelings for her. An unexpected turn of events then forces him to redefine his definitions of love and devotion. This witty, charming fantasy romance feels best suited to a younger adult audience, who will appreciate the book’s accurate portrayal of the dating scene. Emory’s sarcastic sense of humor and slight traces of pessimism are consistently amusing: “The last wedding he would ever attend in the Earth realm was going to be at a courthouse. On a Thursday. It was a fitting conclusion to his miserable career.” These human qualities are what make Emory such an engaging and relevant character despite his tendency for arrogance. Likewise, Blair’s tailspin into depression and loneliness feels authentic and unpretentious; after all, as everyone knows, there’s no quick fix for a broken heart. In the story, the color of a character’s aura indicates their readiness for love, and this device provides plenty of entertainment as Emory surveys his hunting grounds for suitable targets. Throughout, the plot zips along, providing intriguing developments with each new chapter.

A delightful, feel-good novel that offers a fresh take on modern love.