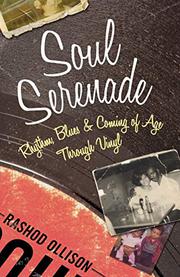 An elegiac look at a childhood marked by violence, dysfunction, poverty, sorrow—and plenty of good music.

Little Rock native Ollison, former Baltimore Sun pop critic and now a writer for the Virginian-Pilot, opens this memoir with a horrific incident that unfolds like a Greek tragedy, its sad climax the death by bullet of a tiny young sibling, “bow lips parted and baby-doll eyes flung open,” in the arms of the girl who would become his mother. Unhappy memory builds on unhappy memory: there is the brief, shining courtship, then a father who will disappear and appear and disappear again, “often in the streets when he wasn’t nodding off at home or having nightmares that made him scream and jump in bed,” along with a mother who finds no need to express love as long as she puts food on the table, a scary grandmother whose face bore “its usual fuck-you expression,” and a community of children inclined to bewilderment in the face of all that adult confusion. Much of Ollison’s memoir, reminiscent at many turns of Claude Brown’s classic Manchild in the Promised Land (1965), turns on the quest for identity: when his schoolmates shout “faggot,” there’s more at play than they might have realized. But more, what shapes identity and offers hope and even love are the records that Ollison spins, left behind by his father and picked up along the way: Marvin Gaye, Aretha Franklin, Tyrone Davis, Stevie Wonder, and, of more recent vintage, Mary J. Blige (“the wounded warrior voice of my generation”). So powerful are Ollison’s responses to music that readers might wish that he addressed the matter in more circumstantial detail, if at least for dramatic relief from his descriptions of passing events that are often ponderously awful.

Honest and painful. Readers inclined to lament their own circumstances may brighten up when considering the odds Ollison has overcome.