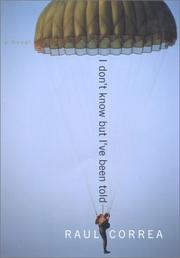 I DON’T KNOW BUT I’VE BEEN TOLD

Parachute drops, Panamanian romance, and Huck Finn fill the memories of a tugboat crewman walking Manhattan’s streets and riding the subways through the night.

The authenticity in this first novel from a former paratrooper is not the usual tough-guy patriot stuff. Correa’s nameless protagonist, a paratrooper in the 82nd Airborne, is a doper who hangs onto his one copy of Twain’s masterwork and a pathetic letter from a girl he met in a tropical bar. He and his buddies routinely fuel their flights with uppers and fill their nights with marijuana, and when their chutes rip, they’re ripped. In their off-hours at Ft. Bragg, they head for the strip to add beer to the drug mix and spend everything they’ve got on Korean bar-girls. Tough kids, dropouts, orphans, guys with records, they respect their lifer sergeant “Platoon Daddy,” Vietnam battle veterans, the handful of outfits that are tougher than guys who jump out of planes to go to war, and that’s about it. Small-town and ghetto ignorance is their weakness, leaving them vulnerable to the wiles of Mr. Big, a fat criminal lurking on the fringe of the huge Army base. Mr. Big promises the boys big bucks for purloined ammunition, a task that looks easy on the face of it, but is most definitely a crime. Correa follows his soldiers through the Army’s jungle training course in Panama, where “Too Easy,” the nameless protagonist, falls big for Paola, a pretty young whore, to a wild jump in Kansas, then back to Ft. Bragg, where Mr. Big is getting impatient for his explosives. The final incident that puts the narrator on the track to his present dark days in New York is funny, stupid, and horribly predictable. Rough, nearly impenetrable in some spots, but, still, this is as accurate a depiction of the attractions and idiocies of enlisted warrior peacetime life as you’ll find.

Officers may take offense, but the troops will say, “Yeah, man. That’s right.”