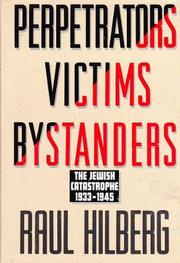 A provocative and lucid analysis of the Holocaust that takes up the roles of various individuals and groups; by Hilberg (The Destruction of the European Jews, 1985, etc.). Hilberg begins with Hitler, ``the supreme architect of the operation.'' But ``there was never a blueprint,'' the author contends, other than the mobilization of Germany's ``power, and the actualization of its threats.'' Other ``perpetrators'' who carried out Hitler's design by persecuting, deporting, and killing Jews fall into eight categories here, including ``newcomers'' like Goebbels, Goering, and Eichmann; members of ``the establishment''; and, shockingly, ``physicians and lawyers.'' Hilberg also notes groups of ``victims.'' Besides ``Jewish leaders,'' ``refugees,'' and ``the unadjusted,'' there were ``survivors,'' who exhibited ``realism, rapid decision making, and tenacious holding on to life,'' as well as ``children,'' like those in the Lotz and Warsaw ghettos, where the smallest suffered the greatest pain. Hilberg builds his case by interlocking individual histories with statistics. ``Of the 4,918 children to age fifteen who were deported to Auschwitz from Belgium,'' he writes, ``53 came back.'' The author's calm and dispassionate voice exacts the full horror from the simplest statements, as when he writes that ``some trains were composed primarily of children.'' And he refuses to let up in the final section on ``bystanders''—who were, of course, not without blame. A report on Auschwitz was ``buried'' in both the US government and the UN, Hilberg reports. Unforgettable, though, is the SS engineer who was assigned to deliver gas to Treblinka but who disposed of the poison and then reported the death camp to a Swedish diplomat. A masterful interpretation, illumined by Hilberg's vast knowledge.