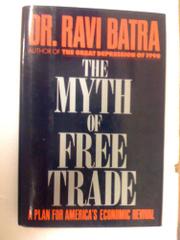 THE MYTH OF FREE TRADE

A Plan for America's Economic Revival

Southern Methodist University professor Batra, whose contributions to economics are about on a par with what creationists have done for earth science, is at it again. This time, the author of The Great Depression of 1990 and other nonconformist rants takes on Adam Smith and laissez-faire, making what he confidently asserts is ``the first...systematic and cogent case for protectionism.'' With frequent breaks to settle his scores with his ``vociferous critics,'' and with reminders of the timely warnings he offered an inattentive establishment in years past, Batra takes the position that manufacturing, not trade, is the main source of a modern nation's prosperity. Free trade, he contends, has proved a disaster for the US since the 1970's, undermining domestic industry and precipitating a sharp drop in inflation-adjusted wages for up to 80% of the population. Assuming that American suppliers can't produce goods as cheaply or as well as offshore rivals that have access to a vast pool of low-cost labor, Batra gets down to business with a series of provocative proposals for remedial action. The centerpiece of his program (dubbed ``competitive protectionism'') is an immediate hike in import duties from the current average of 5% to at least 40%. And while shielding US enterprise from foreign predators, the author would ensure that there are no dominant, let alone monopolistic, firms in any field. This master plan, Batra maintains, could not only put America's productivity and real income into orbit but also trigger steep declines in budget deficits, energy prices, and global pollution. Beyond his self-serving analyses of legislation like the Smoot-Hawley Tariff Act of 1930 (which he repeatedly refers to as ``Hawley-Smoot''), Batra seems more intent on creating a plausible populist agenda than in getting at the truth of complex economic issues. A perversely contrarian tract, then, more notable for shock than for substance. (Charts and tabular material throughout)