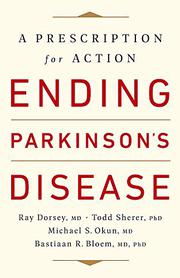 A lucid, multiauthored guidebook on Parkinson’s will serve readers who are affected or simply want to know more.

The authors, all veteran Parkinson’s researchers, begin with Dr. James Parkinson’s 1817 “An Essay on the Shaking Palsy,” which described six men who suffered tremors and walked bent over with slow, shuffling gaits. Although rare at the time, write the authors, “the spread of the disease has loosely tracked the growth of industrialization.” Currently, China’s burden of cases is on track to surpass America’s. Inheritance plays a modest role, with many genetic mutations increasing the risk. Head injuries can also contribute. Much evidence points to insecticides, fungicides, and herbicides, especially paraquat and industrial chemicals. The disease results from degeneration in a small brain area that regulates movements. Cells that die are those that produce dopamine, an important chemical that transmits nerve impulses, and treatment involves stimulating dopamine production in the remaining nerves. When the drug Levodopa, which increases dopamine production, appeared in the 1960s, the results were miraculous, with profoundly disabled victims regaining normal movements. Sadly, as years pass and nerves continue to die, symptoms return, and disturbing side effects appear. The authors chronicle treatment improvements over the years and summarize hopeful research, although no dramatic breakthrough seems on the horizon. A healthy diet reduces the risk. Vigorous exercise not only does the same; it also helps victims maintain activity. Proper treatment is critical; neurologists (like the authors) do much better than family doctors. Finally, the authors list worldwide organizations that assist victims and caregivers, and they exhort readers to lobby governments for better services, more research, and action to clean up the environment. Many Parkinson’s-associated chemicals banned across the world are still used in the U.S. As with climate change, America’s Environmental Protection Agency considers the evidence against them unconvincing.

An excellent overview, encouraging and informative if only mildly optimistic.