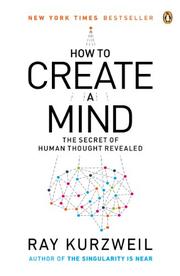 HOW TO CREATE A MIND

The Secret of Human Thought Revealed

A pioneering developer of optical character recognition and text-to-speech software explores the possibility of creating a synthetic neocortex that could surpass the human mind.

Kurzweil (The Singularity Is Near: When Humans Transcend Biology, 2005, etc.) bases his prediction on modern insights into how the brain has evolved a hierarchical pattern-recognition structure. We perceive the bare outline of events and reconstruct memories in an ordered sequence, and our ability to fill in the blanks provides the foundation for conscious experience. “We are constantly predicting the future and hypothesizing what we will experience,” writes the author. “This expectation influences what we actually perceive.” Kurzweil estimates that at birth, the neocortex contains 300 million pattern processors connected horizontally and vertically, which allow us to connect patterns. In his opinion, it is these processors, rather than the neurons of which they are composed, that are the fundamental units of the neocortex. They allow us to fill out an increasingly complex picture of reality, enabling us to rapidly evaluate our environment and then confirm our hypothesis by checking out the details. Then we are able to respond rapidly to changes in our environment by creating new technologies. Why not create a synthetic extension of our brain using advanced computer technology? It could “contain well beyond a mere 300 million processors,” perhaps as many as a billion or a trillion. Our dependence upon search engines and other technology is a harbinger of a future in which we will not only outsource information storage but directly enhance our mental functioning. In a parallel development, Kurzweil and other software developers are designing more advanced computers based on complex modular functioning.

A fascinating exercise in futurology.