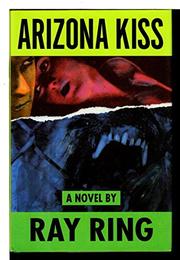 Ring's idea of a break from his series about wildlife investigator Henry Dyer (Telluride Smile, Peregrine Dream) is this desert Double Indemnity, in which muckraking Phoenix news photog Russell Macky meets more than his match in broken-nosed femme fatale Alice Malone. Macky, looking for a new story after his exposÇ of business as usual at the San Ignacio mine, is a natural for flaky, sultry Alice's bait: a chance to snap Judge Leo Harker illegally fighting his pit bull against lesser canines. When the Judge catches Macky and Alice rutting behind the grandstand and humiliates them by forcing them to perform in the dog ring, Macky improbably decides his pictures aren't enough: he wants to shoot the Judge training his dogs—no, he wants to shoot him beating up Macky, a masochistic trap he arranges with his prying editor Jack Crisler. Something's bound to go wrong, and something does—one of the Judge's lugs accidentally kills Crisler, and Alice grabs a tape that proves Macky's conspiracy and entrapment, tells the Judge about it, and warns Macky she'll tell the law too unless he helps her kill the Judge—her plan from the beginning, as readers who didn't skip Ring's dedication to James M. Cain or his opening sentence (``I never set out to kill anyone'') will have figured. Too many hard-bitten Arizonaisms (``In Arizona you can live with a woman who wants you to commit murder, and be worried about losing her'') — but there's a wonderfully nasty sense of Macky's friends and foes alike as pit bulls and rattlesnakes just dying to give you that Arizona kiss.