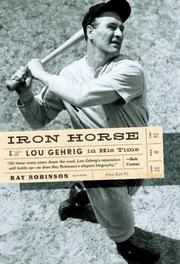 A sturdy but oddly unsatisfying biography of Lou Gehrig, arguably major-league baseball's most tragic hero. Robinson (who ghosted Oh Baby, I Love It for Tim McCarver) provides a thorough account of Gehrig's life and times, plus an afterword on Pride of the Yankees, ""a three handkerchief film"" starring Gary Cooper. The sole surviving son of immigrant parents, Gehrig grew up in Manhattan's Washington Heights. His athletic abilities earned him a place at Columbia Univ., and later on the Yankees. Playing in the shadow of the flamboyant Babe Ruth, Gehrig helped the Bronx Bombers win seven pennants and six World Series, from the Roaring Twenties through the eve of WW II. Despite a career batting average of .340 and 493 homers, the quietly industrious first baseman is best remembered for playing in 2,130 consecutive regular-season games. The streak ended in the spring of 1939 when amyotrophic lateral sclerosis, a wasting polio-like disease, abruptly robbed Gehrig of his marvelous physical skills. Still the team's captain, he spent the season on the bench. Mayor La Guardia gave the future Hall-of-Famer a job on N.Y.C.'s Parole Commission, but he died in 1941, less than three weeks short of his 38th birthday. Robinson makes every effort to bring the off-field Gehrig down to human scale, e.g., recounting the tensions that kept his domineering mother and beloved, loving wife at ann's length. But the problem may be that his subject was a genuinely diffident man who kept his own counsel and let diamond feats speak for themselves. Notwithstanding the platitudinous tributes of contemporaries, anecdotal reportage, and a wealth of statistical material, then, Gehrig remains an enigmatic individual whose competitive spark, grace under mortal pressures, and allied attributes can apparently be related, albeit not explained. In the parlance of the summer game, Robinson is thrown out trying to stretch a solid two-bagger into a triple.