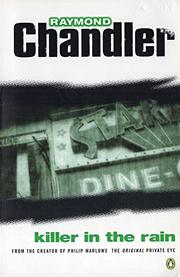 KILLER IN THE RAIN

A posthumous collection of eight stories by a master of hard-boiled evocation shows the sources not only of Philip Marlowe, the shamus, but also of several of the Marlowe novels. For example, the title story later went into The Big Sleep. Though Marlowe has a number of other names here, he's still Marlowe and can tick off a characterization with extreme economy and he also knows L.A. backwards and downwards. The stories first appeared in pulp magazines back in the '30's and they combine that rough rasp of authenticity with a high literary finish which has secured Chandler's position, along with Hammett's, in the line-up of immortals.