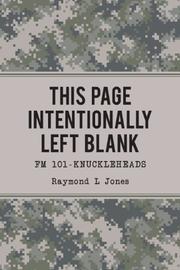 Jones’ debut is a lighthearted autobiographical account of his time in the Army and endless dealings with those less bright or couth; as he affectionately dubs them, knuckleheads.

In his introduction, Jones acknowledges that his “intent is to entertain.” That’s exactly what he does with his memoir, a collection of often amusing anecdotes. The chronological order—from Jones’ first assignment in Germany in the early 1990s to his deployment in Iraq a decade later, culminating with his attempt to return to civilian life—gives the work a sense of cohesion. Most of the stories consist of the soldier getting “screwed” by superiors, such as the noncommissioned officer in charge who treats National Guard cadets like slaves with unrelenting chores. Retaliation comes in the form of pranks or a higher-ranked officer interceding on Jones’ behalf. But while tales of dense knuckleheads are funny, and the author admits to similar behavior on his own part—inadvertently using the women’s latrine, for one—the work sometimes leans toward haughtiness. Pride over his stellar score in front of the promotion board is understandable, but the narrator then mocks the only man who has scored higher, belittling his fondness for reading military manuals. Jones largely avoids using names, real or fake, which does make the book a smidgen impersonal, especially the few scenes that take place at home, as even his wife isn’t named. The military story has, as expected, a lot of shorthand and acronyms—anything from ranks to vehicles to weapons—and Jones does an exceptional job of clarifying most of them and ensuring that the reader acclimates to military parlance. Jones’ greatest, most hilarious bits are tucked away inside the longer accounts: His wife helps him peruse Army manuals and is such a quick study, she becomes a reference later for other officers; his hometown is so small, residents marry someone out of town to ensure they aren’t related; and he prefers avoiding snipers and IEDs to driving in Houston traffic.

Respectful while maintaining an ebullient, sometimes-facetious tone, even in a war zone.