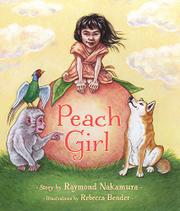 Can peach dumplings save the world?

In this picture-book adaptation of the popular Japanese folk tales about Momotaro (usually translated as Peach Boy), a little girl springs out of a large peach found by “a farmer and her husband” outside their door. The girl soon is dressed in clothes made out of the peach skin by the farmer. The husband creates a helmet and shield from the peach pit. The girl declares that everything is “Peachy” and that her mission is “to make the world a better place.” She immediately sets off to find an ogre who is reputed to eat small children. Armed with only her wits, her courage and some delicious peach dumplings cooked by the farmer, she meets a monkey, a dog and a pheasant who, lured by the dumplings, accompany her on her quest. After they sail to the ogre’s island, the animals are too scared to approach its palace, but Momoko has no fear. She offers the Shrek-like ogre some dumplings, and they share them over tea. He even says “Peachy” when Momoko offers to come back with her parents. The acrylic paintings feature a winsome girl, three friendly animals and a jolly green giant whose friendliness belies the tales told of him. Despite its somewhat arbitrary use of American slang of an earlier decade, this story has a satisfying ring and a tasty ending.