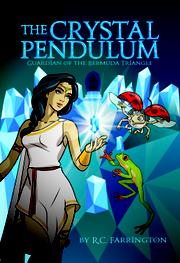 Guardian of the Bermuda Triangle

A group of friends find a new way to explore the ocean in the latest YA novel by Farrington (Shadows of Black Bayou, 2016, etc.).

The Spinners, a group of teenagers who previously starred in their own trilogy, get drawn into a more fantastic adventure than they expected while hunting for skinks on an island in Bermuda. After they fall down a hole inside a cave, they find themselves surrounded by tiny people who waste no time in shrinking the teens down to their own size. The Spinners soon learn that they’re now in Atlantis, the shrunken remnant of a once-great kingdom. The Atlanteans live in a luxurious dome on top of an underwater volcano, held in balance by a magic, crystal pendulum that keeps earth tremors from destroying the city. But their enemies, the Dredge, live in a dark, dangerous realm beneath the volcano called Undercroft. The Spinners join Princess Ariadne of Atlantis as she struggles to escape the evil plots of the Dredge leader, Styx, who wants to destroy the pendulum for good and bring down Atlantis—even though that would spell doom for his realm, as well. Along the way, they meet new friends, such as Slink the Skink, and battle giant cockroaches and other beasts. Farrington’s world of Atlantis is imaginative and often vividly described (“The pendulum aligns directly over a razor-sharp, triangular, pointed, black magnetic stone”). Unfortunately, the characters aren’t. Aside from terse introductions at the beginning, there’s hardly anything to distinguish one Spinner from another, even though some sport unusual names, such as Portagee. The dialogue doesn’t help matters, as it mostly consists of oddly clinical descriptions; for example, before they fight giant spiders, one character says, “On the surface, spiders tend to stay to themselves, but usually where there’s one, there might be others in the more remote places in this cave.”

A journey through a magical world, but one that’s filled with decidedly unmagical characters.