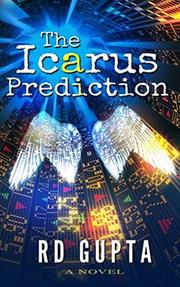 A Wall Street golden boy applies the skills he learned while working for the CIA in this debut novel.

From Beirut to Pakistan to Russia to the nation of Georgia to New York, this tale breathlessly travels the globe as Jarrod Stryker races to rescue his Wall Street firm from financial ruin and certain criminal prosecution due to his mentor’s mismanagement. Readers are in Big Short territory here with lots of talk of CDOs, unhedged positions, and discretionary equity accounts. “Extraordinary measures have to be taken,” Stryker resolves. This involves the necessity of oil prices dropping below a certain benchmark, and a Stryker-devised “Hail Mary” juggling of funds—a scheme given a high rate of success by Icarus, the firm’s $8 million supercomputer. “Either you are totally insane, or you have the biggest set of stones on Wall Street,” a co-worker tells him. But Chechen militants, led by “the Russian bin Laden,” blow up a Russian pipeline, sending oil prices up. Before they can strike again, it is up to Stryker to rely on his CIA training to neutralize them and drive prices down. He reunites with former fellow operative and lover Sarah Kashvilli, for whom he had “fallen on his sword,” resulting in Stryker being drummed out of the agency. Gupta writes credibly about the financial maneuverings while building suspense regarding what the terrorists are up to. Humor is not his strong suit, and the prose at times can be inelegant (“Sheila and Don looked as if they had just had a bowel movement”). Stryker and Sarah are slated to return in a sequel in 2017. That’s too long to wait for Sarah, who deserves a book of her own. She possesses an intriguing back story and spectacular sniper and combat skills that, in one of the book’s most audacious set pieces, impress even a Delta Force commander. Parachuting off a mesa’s edge, grenades in each hand, Sarah single-handedly takes out a truck containing four members of al-Qaida.