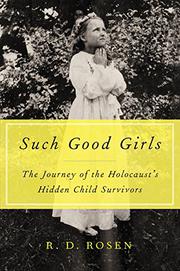 The Journey of the Holocaust's Hidden Child Survivors

Through the stories of three fortunate Jewish girls—one Polish, one French, one Dutch—the author reveals “hidden children” as an unexplored facet of Holocaust research.

A versatile writer known for his Harvey Blissberg mysteries and other offbeat works (A Buffalo in the House: A True Story of a Man, an Animal and the American West, 2007, etc.), Rosen enters the lives of these three girls and others hidden at enormous peril during World War II. The three made their getaway from Nazi persecution with the help of Christians, and they were instructed in how to be quiet, obedient and confused about their identities. Five-year-old Selma Schwarzwald and her mother, Laura, were able to escape the Lvov ghetto in 1942 after husband Daniel bought them Christian identification papers before he was taken away and never heard from again. The resourceful mother grilled her fair-haired daughter on their new identities, as well as on the Catholic catechism, and fled to Krakow, then to Leming, where Laura, with her fluent German, found work translating for an SS man. Six-year-old Flora Hillel, at school in Nice, France, did not raise her hand in class in September 1943 when the teacher asked which children were Jews. Her fearful mother promptly deposited her in a Catholic monastery, where she received rigorous religious training and later lived with and was adopted by a French-Swedish couple and became Flora Hogman; she never heard from her mother again. Carla Heijmans moved around from one safe house to another with some of the remaining family members, much like the family of Anne Frank—except the Heijmans were not found out, and thus Carla carried the guilt of surviving when two-thirds of Europe’s Jewry did not. Rosen examines how the lives of these hidden children turned out; many survivors went into “helping professions” and never spoke of their experiences.

The emotional toll of silence and victimhood, rendered through intimate detail and rich historical context.