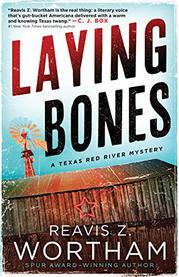 Wortham’s eighth stroll down Lamar County’s Memory Lane traces the fatal aftereffects of a dice game in a bar in a no man’s land the meandering Red River has carved out between Oklahoma and Texas.

Top Parker may have the poisoned gift, but he’s still only 14 in 1969—much too young to be sneaking around the Starlite Club with his cousin Pepper, her Choctaw boyfriend, Mark, Curtis Parker, and Curtis' girlfriend, Sheila Cunningham, while R.B. Parker, another cousin, is rolling the bones inside. In R.B.’s hands, the dice are red-hot, but his lucky streak doesn’t last long enough to get him through the night: He ends up in a creek in his wrecked ’47 Chevy pickup—drowned, according to county coroner Tony Roth.  The suspicions of Top’s grandfather Constable Ned Parker and Top’s uncle, Lamar County Sheriff Cody Parker, already alerted by the fact that $2,000 R.B. won is missing, go into overdrive when the other gamblers in the game start to drop like flies, every one of them, Roth avers, an accidental death. Club owner Buster Rawlins is clearly up to no good, and his minions act as if they’d be happy to kill anyone he asked them to. But the truth about that fatal game lies deeper, though by no means too deep for readers who can comb through the ranks upon ranks of Parker relatives and the psychedelic horrors that are unleashed when Top’s visions are sent into overdrive by an unwitting dose of LSD.

Nearly as many victims as cousins. Will anyone be left for the ninth installment?