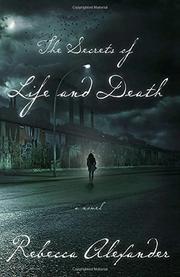 THE SECRETS OF LIFE AND DEATH

Despite its portentous title, this debut novel is neither a lost work by Tolstoy nor an ironic hipster comedy, but an occult thriller aimed at readers not yet sick to undeath of vampires. In case there aren’t any of those left, Alexander mixes in three or four other popular genres: historical fiction, serial-killer mystery, hints of zombies and touches of romance.

The vampires in question don’t swirl capes or turn into bats, but they do trace their origins to a remote castle in the Carpathians. As the novel opens, Queen Elizabeth I’s favorite alchemist, Doctor John Dee, and his assistant, Edward Kelley, flee from a pack of wolves on their way to visit the court of King Istvan Báthory, Voivode of Transylvania. The king’s niece Erzsébet—a historical figure infamous for murdering young girls—appears to be dying, and the king asks the alchemists to cure her. Meanwhile, in present-day England, a pair of witches is working to revive a young girl from her predestined death, since the blood of “revenants,” or “borrowed timers,” makes an effective cure for cancer. Can they keep her hidden from her pursuers: the police, a professor, an Inquisition priest and a mysterious woman who may herself be undead? The brief chapters flip back and forth between the two storylines in a way that may have been meant to emphasize parallels in the plots or themes, but it mostly just makes the book feel choppy; no particularly profound secrets of life and death emerge.

Still, Alexander creates an agreeably spooky atmosphere of impenetrable forests and blood lust, with no obvious howlers in the historical sections (unless you count those wolves).