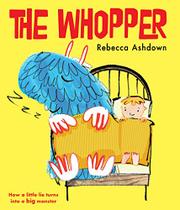 A personified lie that grows bigger with each fib anchors the story of an ugly sweater, some bad decisions, and the restorative power of fessing up.

Percy isn’t too thrilled with his new handmade sweater from Grandma, done in a garish set of colors that make him frown mightily. The moment Percy and his brother, both white boys, get outside to walk the dog, the sweater ends up on the pooch and is destroyed. When Percy comes home, he lies and says he lost the sweater. When Percy goes to his room, his lie has become a little blue creature. “You told a big, hairy, monstrous lie,” it tells him. “It was a whopper. I am your Whopper!” Predictably, the Whopper grows and begins to dominate Percy’s life as the lies continue. Somewhat less predictably, the Whopper gobbles up Percy and takes his place. It’s only when, from inside the Whopper, Percy confesses the truth that the Whopper fades away. Ashdown’s deceptively simple drawings on closer look reveal lovely detail around the edges. She has a knack for drawing adorable pets readers might like to adopt right off the page. The Whopper itself, though less lovable, makes a big impression while not overstaying his disruptive turn in the story.

It’s not easy to make the moral case for always telling the truth without sounding preachy, but this monster book does it by simply sticking to the story and keeping it fun.