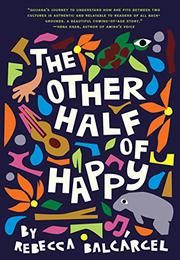 THE OTHER HALF OF HAPPY

A seventh grader plots to run away to Grandma’s instead of going on a family trip abroad.

Half-Guatemalan, half-white Quijana, named for Don Quixote, is much happier identifying as Anglo than Latinx. She doesn’t speak Spanish, a fact that doesn’t bother her too much until her Guatemalan cousins move to town, and not fitting in with the other Latinx kids at her new junior high doesn’t help matters. When her parents announce that the family, which includes her 3-year-old brother Memito, is going to Guatemala over winter break, Quijana knows she can’t go and embarrass herself. She resolves to save money and buy a bus ticket to Florida, where her maternal grandmother is going through cancer treatments. Key to her plan is selling the Guatemalan huipil her abuela sent her in order to pay for the trip. Biracial Quijana’s anxieties about her mixed identity, not fitting in, and wanting to find her own way will ring authentic for readers of mixed backgrounds, but her voice skews younger than 12, and preteens may be unconvinced of the sincerity of Quijana’s friendships with her peers compared with her hyperattachment to Grandma, who seems like her real best friend. Spanish phrases are (thankfully) not italicized but are usually translated within a few sentences; appendices include Grandma’s “wise words,” quotations from Don Quixote, titles of poems referenced in the text, directions to a game played, and science notes.

A novel about liminality with little in the way of originality.