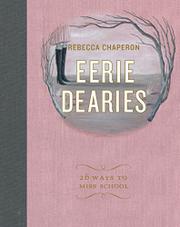 An alphabet of excuses, from “A is for ASTRAL PROJECTION” to “Z is for ZOMBIE APOCALPYSE,” channels the gothic spirit of Edward Gorey.

The text follows the standard abecedary model, with a large single letter and a following line on each spread’s verso. The excuses range from at least faintly credible (“K is for KIDNAPPED”; “M is for MONONEUCLOSIS”) to such less-floatable plaints as “E is for ENNUI” and “G is for GREMLINS.” Painted largely on the covers, jackets or endpapers of old books (with the titles often visible), 26 neurasthenic girls cast in gloomy lighting and clad in school-uniform blouses, skirts and high boots poutingly model or act out each alibi amid minimally detailed surroundings. The backgrounds can be the best parts of the illustrations. Beastly Boys and Ghastly Girls is a nice complement to G; Out of the Night is positively brilliant for “I is for INSOMNIA”; A Perfect Spy makes mordant comment on “O is for OBSERVATION,” in which a drowning girl is espied through a pair of binoculars. Others are less successful: Why position an ex libris sticker over the conked-out girl in “N is for NARCOLEPSY”?

Of doubtful utility as an idea book for young slackers but sure to draw a few chuckles from the teen leather-and-lip-ring set—and grown-ups who often find themselves writing or receiving parental notes to the teacher.