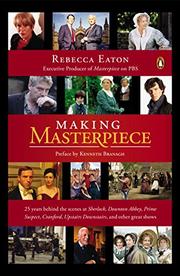 25 Years Behind the Scenes at Masterpiece Theatre and Mystery! on PBS
by Rebecca Eaton with Patricia Mulcahy
BUY NOW FROM
AMAZON
BARNES & NOBLE
LOCAL BOOKSELLER
GET WEEKLY BOOK RECOMMENDATIONS:

Chronicling her 25-year career with PBS, Eaton provides a behind-the-camera look into the creative process involved in producing Masterpiece Theatre and Mystery!

As a self-described Anglophile (“Anglophilia is not a dirty word—it’s an “honorable and manageable condition”), the author’s career path to executive producer of Masterpiece seems to have been predestined. Eaton’s mother was an actress on Broadway in the 1930s and a Hollywood contract player in the 1950s; her father taught Shakespeare and other literature at MIT and elsewhere. “Brought up on a steady diet of classic British literature,” writes the author, “I’m amazed at the inevitability that my life’s work has turned out to be as a purveyor of this particular opiate.” The author combines personal anecdotes with interviews of writers, directors, hosts and numerous stars who contributed to her projects over the course of her career, including Alistair Cooke, Maggie Smith, Diana Rigg and Gillian Anderson. For those interested in the technical aspects of producing a TV show, Eaton lays out the process, beginning with the project’s initial stages through completion, including the delicate dance involved in fundraising. Eaton uses the Masterpiece program Cranford, starring Judi Dench, as her case study, and she also recounts her quest to rebrand Masterpiece for a younger demographic using marketing and social media as promotional tools. “Our social media presence for Downton [Abbey] season three created the highest-ever Twitter buzz for a PBS program,” she writes. Eaton explores the possible explanations for the remarkable success of Downton, which “has catapulted Masterpiece into a whole new orbit of publicity, visibility, and popularity.”

A delightful trek into the world of TV production and a substantive treat for the truly addicted PBS fan.

A SPOONFUL OF SUGAR
by Brenda Ashford
Nonfiction