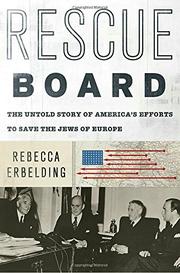 Intriguing history of the only U.S. government agency ever founded with the express purpose “to save the lives of civilians being murdered by a wartime enemy.”

America’s closed-door immigration policy, the product of an intractably isolationist Congress, did not budge during much of World War II, even after Hitler’s program of annihilation became a known reality. As U.S. Holocaust Memorial Museum archivist and curator Erbelding writes, it was largely thanks to a German-American lawyer named John Pehle that formerly private efforts at rescue became official ones. Firmly committed to an activist sense of justice, Pehle worked at the Treasury Department, leading efforts to freeze the assets and accounts of the nation’s enemies—and thus “economically fighting the war long before Pearl Harbor.” His office also monitored relief funds to Jewish refugees, and it was from that starting point that Pehle eventually organized the War Refugee Board, which, beginning formally in January 1944, provided such funding. Moreover, the WRB was its own clandestine operation on a par with the OSS, funding Resistance fighters in France, paying smugglers, bribing officials, and even floating efforts to negotiate with the Nazis directly to ransom European Jews. The last proved controversial and fell apart thanks to institutional resistance. As the author writes, “Great Britain refused any bargain designed to stave off Germany’s defeat, nor could it care for a million released prisoners, which would undoubtedly force the Allies to call a temporary halt to the war.” Even WRB efforts to make the Holocaust known to American soldiers and those on the homefront were quashed. But many of the WRB’s efforts were more successful overall, including opening diplomatic pathways to allow Jews to enter and settle in British Palestine, saving thousands of lives in the bargain. The denouement of the story is satisfying, too, for Pehle helped prosecute Nazi war criminals, while one of his colleagues became mayor of New York.

A fine work of scholarly detection, turning up a story that deserves to be much better known.