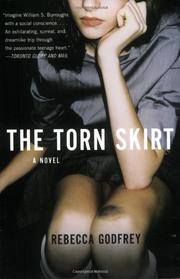 Teenage angst gets a surprisingly honest and effective rendering from a bright new voice.

Born with a raging fever and raised in a frightening, Manson-esque (without the murder) commune on the West Coast, Sara Shaw is a girl just trying to make it through her small-town high school. Her father’s a decent sort, benign and useless in a hippie sort of way, and at least he leaves her alone. Sara hangs with the burnout guys at school but doesn’t feel exactly fulfilled by their established rebellion, knowing that no matter how much Led Zeppelin they listen to or dope they smoke, none of them has any ambitions beyond their town. Sara becomes inexplicably obsessed with Justine, a furiously antisocial girl in the torn skirt of the title, and after randomly spotting and tailing her, gets caught up with a floating world of hookers and junkies who inhabit the town’s so-called “Red Zone.” At this vulnerable stage, her father decides to take off for the woods as part of his quest to lead a simpler life, and Sara’s slide into FTW (“Fuck the World”) behavior accelerates. School attendance quickly becomes a thing of the past, and before she knows it, she’s rooming with junkies and becoming fodder for cautionary tales. Launching into her narrative—“those twelve days when there was too much rain and I was burning and I found and lost Justine”—with seemingly no purpose, Godfrey offers few surprises in her story but constantly impresses with her precise eye and impassioned tone. This first-timer may not have opened new vistas of literature, but she brings this feverish girl fully to life on these rage-prone pages.

Giving witness yet again to the self-created drama of adolescence: a serious bullet of a book.