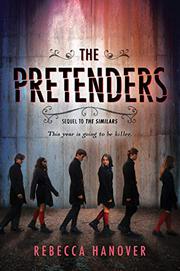 From the Similars series, volume 2

In this sequel to The Similars (2018), tensions rise as the villains reveal a ploy to exact revenge on the Ten and their families and ultimately take over the world.

When Emma Chance returns to her elite boarding school, Darkwood Academy, for her senior year, things are different: Her best friend, Ollie Ward, is back while Levi Gravelle, Ollie’s clone and Emma’s love interest, has been imprisoned on Castor Island. More importantly, Emma is coming to terms with the contents of a letter from Gravelle which states that she is Eden, a Similar created to replace the original Emma, who died as a child. To complicate matters further, other clones—who are not Similars—infiltrate Darkwood, and Emma and her friends uncover a plot that threatens not only the lives of everyone they care about, but also the world as they know it. Hanover wastes no time delving right into the action; readers unfamiliar with the first book may get lost. This duology closer is largely predictable and often filled with loopholes, but the fast-paced narrative and one unexpected plot twist make for an engaging ride. As before, most of the primary characters read as white, and supporting characters remain underdeveloped. Despite its flaws and often implausible turns of events, the novel calls attention to larger questions of identity, selfhood, and what it means to be human.