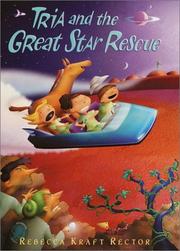 TRIA AND THE GREAT STAR RESCUE

Fans of Sadler’s Zenon Kar, Girl of the 21st Century (2001), take note: here’s another futuristic adventure featuring a plucky but vulnerable preteen saving the day while fussing over personal issues. A frantic phone call from her archaeologist mother heralds a string of challenging situations for Tria. First, she’s hustled out of her familiar pod on planet Chiron to a luddite “Back To Basics” school where she’s forbidden even the comfort of her hologram companion Star; then she’s menaced by mad scientist Dr. Roparian and other nogoodniks seeking a mysterious artifact her mother brought home that (it turns out) can make holograms solid, and vice versa. With the help of two new schoolmates—meek-but-competent Brash and bully-turned-buddy Dayla—plus a wise electronic tutor she accidentally installs in the body of a robo horse, Tria rescues her mother, foils Roparian and cohorts, and even manages by the end to become a little less dependent on Star’s company. It’s an awkward debut, hung about with massive coincidences and typecast supporting characters, but Rector writes easy, engaging prose, and never lets the pace lag for longwinded explanations. (Fiction. 10-12)