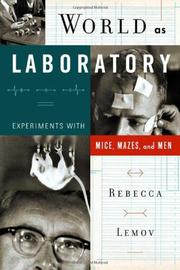 Experiments with Mice, Mazes, and Men

A debut that offers a critical look at the foundations of the social sciences in America.

Lemov (History and Anthropology/Univ. of Washington) begins in the 1890s with Jacques Loeb, a German-born biologist who specialized in engineering two-headed worms and other biological freaks. Loeb's innovative approach inspired his student J.B. Watson to develop laboratory experiments, most famously running rats through mazes, that could be applied to the study of psychology. The founder of behavioral psychology, Watson also conducted experiments on human subjects, including infants. Social engineering took off in the 1920s, under the sponsorship of large charitable foundations. By the 1930s, social scientists were confident that what they learned from lab rat experiments could be applied to the human population. Some of the experiments on human subjects crept into dubious territory; Lemov feels that O. Hobart Mowrer's use of electric shock therapy (“aversive conditioning”) laid the groundwork for “scientific” torture. After World War II, the various Pacific islands liberated from the Japanese served as laboratories for the largest social-science research project in history, supported by the U.S. Navy. By the 1950s, other governmental organizations—including the CIA—were sponsoring research into the brainwashing of U.S. POWs reportedly conducted in Korea. These experiments included research into the use of LSD as an agent of behavior control. Lemov concludes with a look at how the fruits of the human-engineering movement persist in 21st-century society, from psychological testing to focus groups.

A largely negative assessment of an important part of our cultural and scientific history.