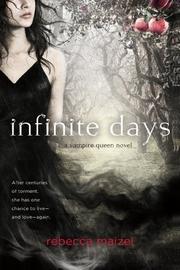 From the Vampire Queen series, volume 1

Once the most feared vampire in the world, Lenah Beaudonte wants what all vampires eventually want: to be human and feel, love and even cry again. After an elaborate ritual that involves the death of her soul mate for the last 592 years and a 100-year secret hibernation at her English countryside estate, Lenah awakens at an elite New England boarding school, returned to her former 16-year-old human self. As she adjusts to the new century (almost too quickly, “chatting up” friends in mere days), tries to fit in with her peers and experiences her first human love with gorgeous and intelligent Justin and guilt for her past ruthless killings, flashbacks across the centuries reveal Lenah’s former life as a vampire, how she formed the coven she rules and why she must prepare to battle its members once they discover her disappearance. In this new series starter, strong, brave, powerful Lenah sheds the wannabe image, capturing readers instead with her complex yet fascinating history and visceral, at times sensual, narration. (Fiction. YA)