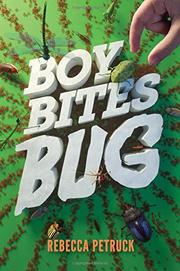 Eating a stinkbug has unforeseen consequences for Will.

Will Nolan, who is white, is shocked when his friend Darryl (also white) calls the new boy in their Minnesota school, Hispanic Eloy, a cholo. The word is not necessarily a slur, but Darryl clearly intends it as such, prompting Will to eat a stinkbug as a very middle school way of proving that he’s not “a jerk,” even if his friend is. Unsurprisingly, Will throws up. He arrives at school the next day mortified, only to find, in a turn of events that makes perfect middle school sense, that the stunt has granted him fame: He’s now Bug Boy. But Will’s problems are far from over: Tensions with Darryl continue to rise, and as he gets to know Eloy, problematic elements in Will’s own thinking and behavior begin to reveal themselves. When Will unintentionally betrays Eloy’s trust, he must decide not only how to redeem himself, but what sort of person he wants to be—and whether someone like Darryl, his lifelong friend with no apparent desire to denounce his bigotry, is someone Will wants in his life. Petruck successfully weaves such important themes as bias, solidarity, and coming to recognize one’s own privilege and prejudice together, delivering them in a plot that is so very middle school (bugs! sports!) that it will hopefully appeal to a broad audience who might not otherwise choose to read about these crucial topics.

An admirable feat that entertains even as it instructs