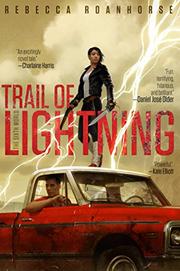 From the The Sixth World series, volume 1

After the Big Water, Maggie Hoskie’s monster-slaying clan powers have woken up. She’s going to need them on a journey culminating in the kind of battle fantasy readers will relish.

In Roanhorse’s hard-hitting debut novel, most of the world has perished, and Dinétah (the Navajo Nation) has risen. A wall has been built to keep the Diné safe from what remains, but little can keep them safe from the monsters that have woken up inside those borders and the witches who work to destroy what life is left. Little except Maggie, whose grandmother was murdered in front of her, who was abandoned by the god Neizghání, who’d saved her. Maggie has been left to hunt monsters alone, hoping for the return of the god she loved like a father and wanted as a lover. In walks the troublingly sexy Kai, whom she reluctantly takes along to hunt monsters and who has medicine big enough to perhaps heal the Earth from the Big Water. As her quest grows, Maggie and Kai battle immortals and mortals alike, and Maggie ends up wondering whom to trust. Propelled by the Coyote god Ma’ii, Maggie confronts her past, her love, and her own power in a war where the stakes are higher than she ever imagined.

Roanhorse, the first Indigenous American to win a Nebula and a finalist for a Hugo, has given us a sharp, wonderfully dreamy, action-driven novel. Here's hoping that the next two in this trilogy will deliver more heart-racing, heart-rending prose.