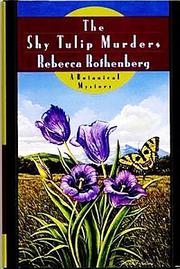 Dr. Claire Sharples, a microbiologist working as farm advisor at a research station in the California Sierras (The Dandelion Murders, 1994, etc.), is not a happy camper. Her little cabin is falling apart; her botanist coworker Sam, a divorced father of two, has dropped her for the more motherly Linda; and someone has put nails in the tires and loosened the brakes of her new Toyota. Meanwhile, battles are being fought over tree-cutting areas, with Nelson Pringle, head of the forest service district, rumored to be in the deep pockets of lumber biggie Gene Doughty. A frightened Claire joins Friends of the Redwoods, a group sparked by rich, vivacious, near-promiscuous Marcy Hobbes, whose Jaguar has also been vandalized. It's Claire's misfortune, while searching for a rare tulip in a remote area, to come across an unconscious Marcy, who dies days later in the hospital. Police Chief Tom Martelli treats the death as an accident, and obnoxious Sheriff J.T. Cummings deals perfunctorily with a second death—that of forest- service worker Andy Nilsson. It takes Claire, on her own, to ferret out the unconvincing villain, and to see that justice is done, after a fashion. At times jauntily written but often pretentious, with a heroine not fully centered (in the New Agespeak generously so sprinkled here), much aimless roaming up and down the mountain, and reams of botanical lore. All add little to an unfocused puzzle. Rather dreary stuff, then, except perhaps to environmental enthusiasts.