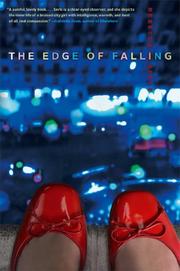 THE EDGE OF FALLING

Wealthy high school junior Mcalister “Caggie” Caulfield seeks relief from grief over her younger sister’s death by entering into a dangerous relationship with a mysterious boy.

After her little sister drowns in the pool at her family’s beach house in the Hamptons, Caggie wants to die too, to the point that she contemplates jumping off the roof at a friend’s party in Manhattan. A schoolmate named Kristen saves her at the last minute but nearly falls herself. Caggie actually ends up pulling Kristen back and is credited as a hero, which only makes her feel worse. In her grief, Caggie spurns the attentions of her best friend and devoted boyfriend, but she finds a kindred spirit in Astor, a tall, dark and damaged new boy at school who recently lost his mother to cancer. But what Caggie comes to realize about her relationship with Astor is that “[d]arkness stacked on darkness just makes it that much harder to find the light.” After another nearly fatal disaster with Astor at the beach house, Caggie is forced to confront the falsehoods she has told her family and friends and let go of her guilt over her sister’s death. Though Caggie makes a point of telling readers that her paternal grandfather called people like her “phony,” almost nothing is made of the connection to Catcher in the Rye, and it serves merely to make Caggie’s tale suffer by comparison.