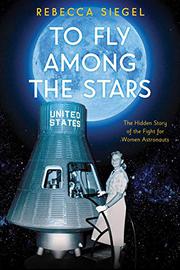 TO FLY AMONG THE STARS

During the Cold War, 13 highly experienced women aviators proved they had as much of the “right stuff” as male astronauts but were nonetheless excluded from America’s space program.

Within the context of the United States’ space race with the Soviet Union, Siegel tells the infuriating story of how these women were denied opportunities even after excelling at grueling physical and psychological tests. As Tanya Lee Stone did in her Sibert Medal–winning Almost Astronauts (2009), Siegel chronicles how the “Mercury 13” proved to be as courageous, intelligent, and fit as any man. Despite this, they were nonetheless ridiculed and thwarted by everyone from Vice President Lyndon Johnson to the Mercury 7 astronauts, and they were shockingly betrayed by the highly respected woman aviator Jackie Cochran, apparently out of jealousy and spite. Whereas Stone’s narrative focuses on Jerrie Cobb, Siegel includes the experiences of all the women and alternates chapters about the women with those about the Mercury 7. Her focus on their arrogant, boozing, loutish, womanizing behavior and sloppiness on missions puts these men—all white, like the women—in a considerably unheroic light. Disappointingly, this emphasis serves as a distraction from the women’s narrative rather than throwing it into relief. And oddly, given this overall icon-busting approach, Siegel does not reveal Wernher von Braun’s Nazi past when introducing this minor character.