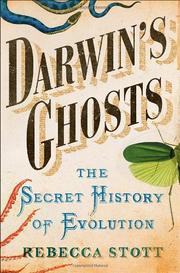 The Secret History of Evolution

Stott (English Literature and Creative Writing/Univ. of East Anglia; The Coral Thief, 2009, etc.) conjures up the spirits of Darwin's scientific predecessors in this excellent follow-up to Darwin and the Barnacle (2003).

When Darwin finally published On the Origins of Species in 1859, he knew he would become the center of passionate debate and possibly even prosecution. However, he did not expect to be charged with “failing to acknowledge his predecessors”—a quotation from a letter sent to him by an Oxford geometry professor, Rev. Baden Powell, who himself faced the possibility of prosecution for heresy. In the first authorized American edition of his iconic work, Darwin attempted to rectify the situation by including a list of his predecessors. Stott amplifies Darwin's list and provides a lively account of the “pathfinders, iconoclasts, and innovators” who were Darwin's spiritual kin over the preceding 2,000 years. She chronicles their lives as they struggled to understand the relationship between extinct and existing species, including humans; she also examines the political and religious persecution they faced from their opponents. Stott begins with Aristotle, who was forced into exile on the island of Lesbos, where he stayed for four years. He dissected birds and fish and puzzled over sponges, which had characteristics of both animals and vegetables. Another of Darwin’s kindred spirits was Benoit de Maillet, who by the mid-18th century had assembled geological and fossil findings to substantiate his claim that the earth was billions of years old and that land species had evolved from sea creatures. Unfortunately, as Darwin learned after including Maillet on the list, Maillet also reported sightings of mermen. The author also includes discussions of, among others, Leonardo da Vinci, Swiss naturalist Abraham Trembley and the ninth-century Islamic philologist and lexicographer known as al-Jahiz. Stott masterfully shows how Darwin, by discovering the mechanism of natural selection, made a unique contribution, but he did not stand alone—nor did he claim to.