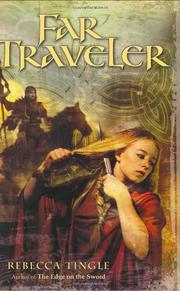 A topnotch reclamation of one of history’s almost-forgotten also-rans. In tenth-century Britain, AElfwyn is the bookish, retiring daughter of the Amazonian AEthelflaed, Lady of the Mercians. Her mother’s sudden death leaves AElfwyn unable to assist her northern allies against Danish invaders, or even to resist her Uncle Edward’s determination to absorb independent Mercia into his kingdom of Wessex. Forced to choose between the convent and marriage, AElfwyn escapes disguised as a wandering scop (bard); but her wit and courage will be challenged by a dreadful test of loyalty, with two kingdoms at stake. Tingle wears her erudition lightly, yet every detail down to the spices in the food and the fastenings on the cloaks rings absolutely authentic. More important, her characters think and act like real Anglo-Saxons, rather than moderns in fancy dress; every word breathes the flavor, ethos and especially the glorious poetry of the period. AElfwyn is particularly appealing; while no simpering miss, she is refreshingly devoid of that feisty “spunk” that too often substitutes for inner strength in female protagonists. As honest about her strengths as her weaknesses, AElfwyn triumphs through intelligence, honor and above all, immense integrity. A gem. (Historical fiction. 12+)