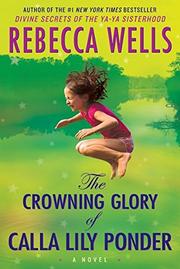 Wells (Ya-Yas in Bloom, 2005, etc.) leaves her Ya-Yas behind to chronicle the life of a Louisiana beautician with healing powers.

Calla Ponder, born in 1953, is raised in the small Cajun town of La Luna, where Calla’s beloved mother M’Dear teaches Calla to trust in the power of the Moon Lady. M’Dear and Calla’s Papa run a dance studio based on M’Dear’s belief in “dancing from the bottom of your heart.” M’Dear also has a salon on her front porch where Calla realizes she loves to help people by fixing their hair problems. Tragedy mars Calla’s idyllic childhood/adolescence when breast cancer strikes M’Dear, who dies with noble grace in 1970. Grief-stricken Calla remains plucky, buoyed by her long-term romance with Tuck, who lives with his grandparents in La Luna to escape his alcoholic mother and sadistic father. As she graduates from high school, her relationship with Tuck falters. Despite high SATs, Calla decides to attend beauty school to follow M’Dear’s example, while studious Tuck leaves for Stanford. He promises to write, but Calla never hears from him again. Heartbroken, she moves to New Orleans to attend L’Académie de Beauté de Crescent—Wells has no use for subtlety. Soon Calla is the prize protégé of Ricky Chalon, who recognizes her potential to raise hair care to “a healing art.” Calla fantasizes about marrying Ricky until she learns that he is gay and happily committed to lawyer Steve. Instead, she falls in love with Ricky’s hunky boat-captain cousin, Sweet, with whom she lives in marital bliss until he dies in a boat explosion caused by greedy oilmen. With the settlement Steve wins Calla, she moves back to La Luna to establish her hair practice. When Tuck, recently divorced, comes home for his grandfather’s funeral, she learns that his well-meaning but wrong-headed grandfather misdirected their letters to keep them apart. Naturally, love wins out.

Wells wallops every button in this sugary addition to the growing genre of Southern beauty parlor uplift fiction.

THAT TOUCH OF MAGIC
by Lucy March
Fiction