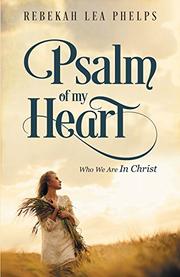 Psalm of My Heart: Who We Are In Christ

A short, passionate “psalm” of one Christian’s personal faith.

During a boring day at her property-management job in 1996, Phelps decided to write out a “letter” to God that she’d long contemplated—a personal “psalm” that she typed up and filed away in a binder. Years later, on a sleepless night, she says that she heard God tell her to publish it, resulting in this quick little volume. The psalm itself is only 12 paragraphs long, a deeply personal and widely allusive statement of faith. It’s a collection of assertions of her certainty in the power of God and the mercy of Jesus Christ, typically conveyed in lines such as, “As I walk through life I walk in Christ Jesus, and I can do all things in him who strengthens me.” Phelps makes clear that although her work was an exercise in compositional inspiration, it was also grounded in years of textual study. In the book’s most interesting feature, she lays out a detailed chart of the textual influences on her work: “the Lord brought a picture to my mind of a cross reference,” she writes. “I thought of putting this into an excel format so that those reading it would know this isn’t just me talking, but the Holy Spirit.” Her fellow devout Christians are clearly her intended audience, and she offers them a brief discussion of the nature of Christian faith. She also has some intriguing, if underdeveloped, things to say about living a religious life (“At the end of the day, Christians aren’t “perfect”, just forgiven”) and traces her psalm’s terms, such as “Abba,” “Bride of Christ,” and “the Elect,” to precise Scriptural chapter and verse. The quotes are sometimes-extensive, and the chart itself is a fascinating work of reference; it’s similar to those found in some Bible concordances but superior to most of them in its quote-selection skill. Bible-study groups may get through the psalm itself fairly quickly, but the chart will give them hours of fruitful work.

An annotated innovation on the psalms of King David.