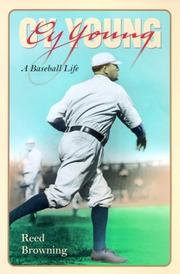 An academic biography of one of the best-known figures in baseball history.

Denton Young was born in 1867 and began to play baseball semi-professionally while still in his teens. During one game in Canton, Ohio, he threw some fastballs that hit the fence so hard they tore off some boards. The local newspaper tagged Young “the Cyclone,” and eventually the shortened nickname stuck. For 22 years, the right-hander demonstrated a pitching skill that became legendary. Browning (History/Kenyon Coll.) relies on extensive written sources in order to give a historically placed picture of Young and his sport, although he is hampered by the fact that Young played before the advent of photojournalism and the development of sportswriting. His task was made all the more difficult by Young himself, who was an extremely private man even by the standards of his day. Browning writes about Young’s best games (including his famous perfect game of 1904) and describes Young (who for a time played and managed simultaneously) as a relentless innovator, continually experimenting and developing mastery over the fastball, curveball, change-up (known as the “slow ball”), and spitball. Russell also puts forward the arguments for and against declaring Young the greatest pitcher of all time (and the namesake of the major leagues’ pitching award): he won more games than anyone else (511 victories), after all, and he compiled more innings pitched than any other pitcher in baseball history (more than 7,350 innings). Browning’s dull prose, unfortunately, leaves much to be desired, but he does give an accurate (and fascinating) account of the development of baseball that took place during Young’s career. In 1890, for example, the pitcher would deliver from a marked-off rectangular box; by 1893, the pitching rubber had replaced the box and the pitching distance was lengthened; and in 1903, the foul strike rule was adopted.

It is this historic perspective that will appeal to the diehard sports historian and to fans of old-time baseball.