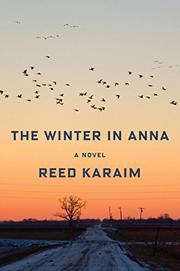 THE WINTER IN ANNA

A longtime journalist looks back solemnly at his first job and one cryptic woman’s influence on him.

Ricky, the narrator of Karaim’s second novel (If Men Were Angels, 1999), opens this story grimly: he’s learned that Anna, a former co-worker, has killed herself by drinking bleach in a motel room. Flash back to young Ricky, fresh out of college and quickly elevated to editor-in-chief of a small-town weekly newspaper in central North Dakota. The job itself isn’t especially demanding—he and his small staff cover fires, floods, and festivals, with the occasional dash of mild civic scandal. Anna is the real focus of his investigative skills, a puzzle he can’t solve but keeps coming back to: a single mother of two, she delivers the occasional tart line to blunt the young man’s arrogance while keeping her past carefully concealed. (Why did she leave her husband? What’s with the scars on her wrists?) The two engage in something of a flirtation, but Karaim is careful not to frame this as a love story or even a woman-who-got-away story. Anna is a study in depression and grief, and as the story moves along, the reasons for those dark emotions become starker and deeper. Anna’s storm clouds, combined with Karaim’s elegant depictions of the wide, empty landscapes on the edge of the Badlands (“the spot in our national geography where the Midwest becomes the West” ), give the novel an overall bittersweet feel—he’s elegiac about youth and simpler times for newspapers. But the novel's structure is overly manicured in ways that make its emotional effects seem forced, from the carefully timed reveals of Anna’s past to the dry subplots about locals and friends’ relationships. Anna’s sadness is sympathetically but repetitively handled, leading to a fate whose end we already learned on Page 1.

A melancholy, earnest study of friendship.